Hands Down, No Question, Experience of a Lifetime!

Our whole journey to Greece was an experience of a lifetime, but this is a place I’ve thought about more than any other!! Since a child, hearing stories and wondering; trying to grasp the unknown. I’d heard so many opinions about it, many differing. Some logistical, many theological.  Most heart wrenching.

Talk about this place swirls around its, one-time resident. I’ve thought about what it would have been like to live here, not allowed to leave. About books written here. Revelations revealed. A place God talked to man, a Beloved Disciple. The harshness of life, for one who loved Christ so well!!

The anticipation was so great, building for years… 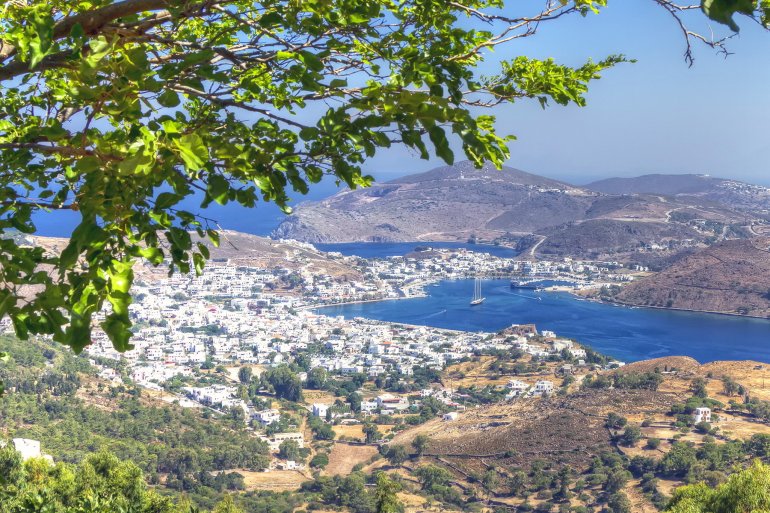 … where St. John was exiled for telling about Jesus in Ephesus.

His religious “cult” a threat to the empire. They first sent him to Rome. He was convicted and sentenced to execution by boiling! They heated a large vat of oil to boiling and then cast the sentenced into it. Death being a sport in that day, it was done in a colosseum for entertainment. Miraculously, John did not burn or fry to death. He was unscathed, like Shadrach, Meshach, and Abednego in the fiery furnace. Rome’s plan backfired and history records many people in the colosseum were led to belief in Christianity that day, if not all!

Not to bring more attention to John, who is still living, though they tried to kill him! They likely wanted him out of sight. His presence was a reminder of their failure. And what if, they tried again, and he lived! That would give him more credibility and following. So, they sent him to the “criminal island”, Patmos. It’s recorded the criminals were treated as slaves and mined the island. But, as our guide pointed out, in a much more humane tone, they were not shackled like in a prison: escaping meant swimming to death. They lived in caves and likely had a very hard existence. Yet, our guide said, they were “free” to “walk around and converse with other residents”. I doubt it was as pleasant as those words sound.

John at this point was fairly old, history says he was there till around 100 years of age.

John wrote several books in the New Testament. Where they were written has several possibilities. But, widely regarded as his last writing in The New Testament, Revelation, was written on Patmos!

So, here I was standing on Patmos, John’s Island.

I tried to reel in my senses and keep from feeling so surreal, that it wasn’t real!

Have you ever felt like that? Pinching yourself to not miss it!

Historical island documents and witnesses, from long, long ago, mark this Cave as John’s dwelling! There is no doubt to islanders that this is the place. It’s been preserved and secured for centuries. The Greek Orthodox Church oversees and tends it. 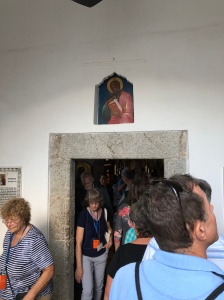 I was prepared and determined not to let any human or material ornament distract me from this experience. They do not allow pictures inside the cave, so I have none of my own. But, I do have some leading up, and a few stock photos I found.

We processed through in a line.

Excerpt from my journal-

…“It was an obvious cave, rock hewed. It was a very somber place for me. Tears welling in my eyes. It was so meager and hard and inspiring. There seems to be no doubt this is THE place. It was such a privilege to stand in that spot and try to imagine all that happened there.

About chest height, there was a carved ledge, John’s writing desk. A cloth now covers it. I placed my hand on that sacred desk. 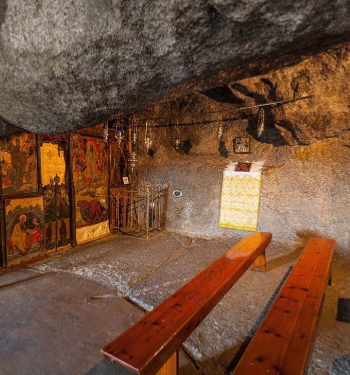 Further down the rock wall, there was a carved niche about thigh high. This is believed to be the place where John knelt to pray, the niche being a handhold, helping him to stand. I placed my hand there, too.

A little further, was a blocked off niche about floor level, much bigger about the size of a Beach ball. This, they told us, was John’s pillow! Laying on the floor, it gave a little rise to a resting position. 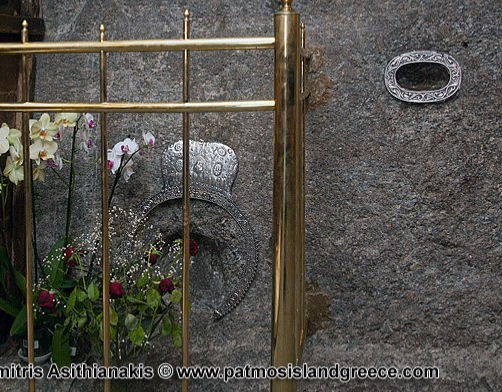 (The niches surrounded by silver. Stock)

Overhead, there is a three-way-split in the rock. It’s taught, this split occurred when God spoke to John. (symbolizing the trinity)

The line kept moving. Thank goodness they provided a bench. I just wanted to stay. Half of our group was behind me, so I sat down with tears: imprinting this place in my heart and mind.

This is where it happened! ……… I stayed as long as I could…”

John lived out his faith, in terrible circumstances. He knelt, prayed, talked to God and God talked to him; content, old, weary, worn!!! Life had thrown the worst at him. He didn’t waiver. He didn’t concede. He knew His Savior and accepted his mission, wherever it led.

The view from the cave was exquisite, breathtaking!! Looking out onto the Aegean Sea; blues, silvers, shimmers, reaching beyond, etc. I know it fed his spirit! 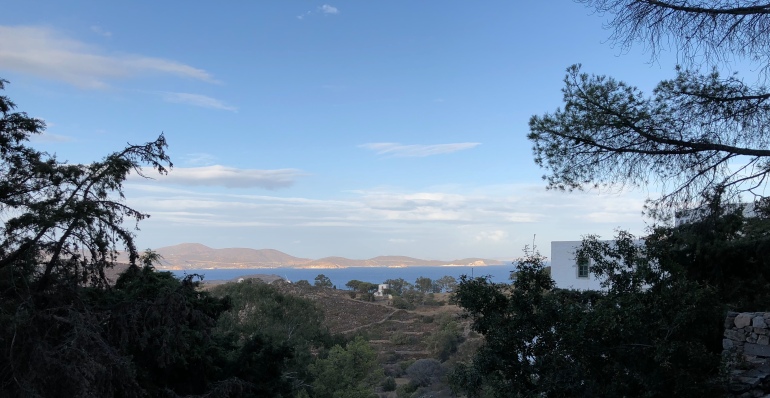 (My photo from the cave.)

For years now, I have listened to a song, “Beloved”, about John and this place, on my way to church every Sunday. It causes me to worship and sets my spirit in the right place. It probably helps that my sons wrote and recorded it, so the voices are familiar. But, it’s lyrics punch my gut and shake me into spiritual and physical reality!

Can you just imagine being loved by Jesus in the physical, on earth? Giving your whole life to Him and for him. Having the memory of him saying your name, every intonation familiar, cherished, memorized? His affection, in return, naming you, “Beloved”! Ahhhh, my eyes overflow with the thought….

And then, continuing life without hearing it?!? It just overwhelms me, makes my stomach lurch. I just can’t imagine how heart-breaking grievous that would feel... everyday, the rest of your life. Feeling the ultimate perfect love, in flesh, daily, and then living without it!!

Especially, the perfect God-man saying your “Beloved” name. Telling of his affection for you each time he spoke it!

His Hope was to hear it again … knowing he would!

After we left the cave, our pastor took us aside and played “Beloved”. It was already so personal for me … it was perfection, chills, real, poignant and altering …

Memory of a Lifetime!

“… I could not feel more blessed to have made this journey and visited this place. An overwhelming convergence of God’s goodness, brought about by a man, a song, a visit and an island!

2 thoughts on “What’s Your Favorite Island?”

“Write what should not be forgotten.”
‭‭