A year ago this week…

Billy Graham passed from this life into eternity!

A “push pause” moment, for me. Floods of memories came to mind. I needed to stop and think about this man who impacted so many lives, generations, cultures and continents.

In centuries to come, I believe, history will view Billy Graham as a Spurgeon, or Martin Luther, maybe John Wesley, Jonathan Edwards, perhaps even Paul or John the Baptist. He, literally, evangelized the world. His life has lasting deep-seeded roots in Christendom. His influence is unparalleled in the 20th and early 21st century. He has no contemporaries!!!

He was unique, set apart. His ministry reached millions and millions of people. He had a magnanimous influence, unprecedented!

Honestly, who can you name who was so known by the world; especially, who spoke the name of Jesus? I think it’s fitting to ponder him, he was certainly an anointed man of God, whose reputation and Christian character were exemplary. 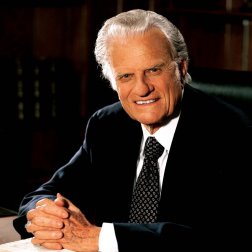 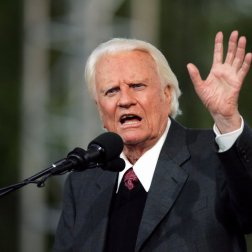 UNITED STATES – JUNE 25: The Rev. Billy Graham, 86, delivers his sermon to a crowd of about 80,000 on the second day of the Greater New York Billy Graham Crusade at Flushing Meadows-Corona Park in Queens. The three-day long event may be the ailing evangelist’s last U.S. crusade. (Photo by Michael Appleton/NY Daily News Archive via Getty Images)

I would venture to say, most of us, if not all of us have a

I have three prominent ones.

I recall gathering around the black-and-white TV set (later color), every time there was a televised crusade. It was an event my parents didn’t want us to miss. I recall his booming voice and tender manner. I remember his Bible held up in one hand and his free hand used for explosive emphasis. “Just As I Am” being sung and throngs of people moving toward the stage to find out more about Jesus. I can see tears in my parents eyes, so moved by what was being said and seen. As I aged, tears came to my eyes, too. I remember thinking, “what if this time, no one responds?” What if all the months of planning, preparing, volunteer hours, earnest intention, truth preached,  delivered no results?  It never happened… every. time. … the aisles flooded with people moved to surrender.

I remember our church being involved in a Baltimore crusade; attending in person, my parents being counselors; in the Baltimore Orioles Baseball Stadium. It was huge, filled to the brim. Passion for God, love, unity seemed palpable. From the first to the last note, it was God. My heart beat faster, God seemed so close and evident. It was miraculous, remarkable, and unforgettable. My eyes filled with tears here, too.

A few years ago, we made the journey to The Graham Library outside of Charlotte, NC. It, too, was remarkable, taking visitors through a journey of Billy & Ruth’s life. I wasn’t sure it would be “my thing”, but it captivated me; like traveling through someone’s lifetime. I found my heart warmed and tears welling. Visiting Ruth’s gravesite pierced my heart and tears rolled. 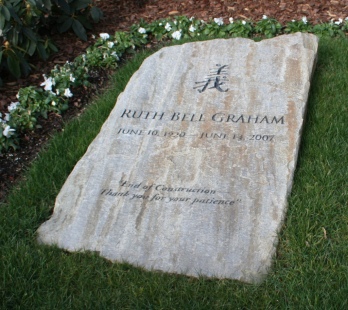 Who will fill the gap?

Surely you have asked yourself this, as I have … He was America’s, if not the world’s Pastor. Who will give his wise counsel to our leaders and exude humility and use such godly wisdom??

I felt loss by his passing, perhaps you did, too. I found comfort and challenge from Billy’s grandson.

Who is the next Billy Graham?

The Sunday after Billy’s death,

Stephan Tchividjian, “Daddy Bill’s” oldest grandson, spoke at my daughter’s Church. The words he spoke have played over and over in my heart!!

“I have seen it all over the headlines…

“Who will be the next Billy Graham?”

“Had you asked my grandfather this question, he would NOT have said, Well, there is this stellar young man I know, or I have heard this man speak and surely He will be the next great evangelist, or there is a guy I am watching in this seminary…

He would have quickly said, when asked who the next Billy Graham is,

“Each of you God has left here, has purpose, a sphere of influence where God has placed you! You know people, who know people… and so on, you can tell about God’s love to them.”

Stephan said, “It likely will never happen the same way as it did for my grandfather. Times have changed. Means are different. But, God still has greater plans to fulfill in each of the lives on planet earth.”

YOU are the next Billy Graham!

Pick up those challenging words.

It is what God called us to do.

God’s greatest purpose is for you to show His love, in whatever means that is. It is different for all of us. Show love to the people He puts around you. Family, friends, acquaintances, strangers, a lost and dying world without hope.

If you are breathing, God still has things for you to do and

has put you in the place to do those things!

He wants His name known: His love accepted and experienced.

He wants His children to come home!

“Some days, there won’t be a song in your heart. Sing anyway.”