I’m not one to “keep up” with Social Media, entertainment news or any news. (I strive to be relevant. Not saturated.) But, you’d have to be held up in a monastery or hiding under a rock to not have heard this news.

I’m a little late to the table, I realize, yet, I’m here and felt a little discussion may be on the menu.

Kanye West is a singer, songwriter, record producer, entrepreneur, and fashion designer. He is among the most critically acclaimed musicians of the 21st century and one of the best-selling music artists of all time with over 140 million records sold worldwide. He has won 21 Grammy Awards, making him one of the most awarded artists of all time and the most Grammy-awarded artist of his generation. (According to Wikipedia)

He is married to Kim Kardashian, a pop culture phenom. They combine to be one of the world’s power couples, especially in the entertainment/media/pop culture arena.

In April, by his profession, he states he became a Christian,

a believer in God and Jesus. The one the Bible defines

and is seeking to grow in his newfound faith.

It became big news last week, when his newest album, JESUS IS KING was released. Until the pre-release hype reached across country, to mainstream media, I hadn’t heard about his conversion. Apparently, the vast majority of us hadn’t.

Since the details of his conversion have, now, appeared to the masses, some sadness has followed. I realize we are all free to opinions, but some of what I’ve seen and read has disturbed and disheartened me.

In the same way, I tell you, the angels of God rejoice over

ONE sinner who repents.

There has been an onslaught of Christians slamming, judging, criticizing, speculating, speaking anything but joy over Kanye’s proclamation.

Can I just say … no matter who bends their knee, repents and accepts God’s gift of salvation, we should rejoice!!

For REAL … the angels in Heaven CELEBRATE!!!

Do we need any clearer example?

We ought to show a similar response to God’s grace reaching another human soul, gifting eternal life!! I don’t care their past! I don’t care if they prove in the future to denounce this faith. When this decision of a lifetime, with eternity at stake, is announced, Christians should rejoice!!!

It’s not for us to judge motives, hearts, sincerity.

Some Christians think they can “figure out”, if it’s real, sincere, true or false!

God alone is the ONE who knows hearts, not us!!

Turn the tables. What if you decided to accept the Christian faith, and your sincerity was suspect? What if they spread doubt and questioned your motives? What if the place you worshipped withheld including you, because they wondered “if you meant it?” What if they “thought” you might start a cult or were trying to scam people? What if you were called a “wolf in sheep’s clothing”? How would it impact your new faith? Is it what Christians should do?

People have thrown every conceivable question at Kanye, like Pharisees attempting a stoning. It is sorrowful and heartbreaking! 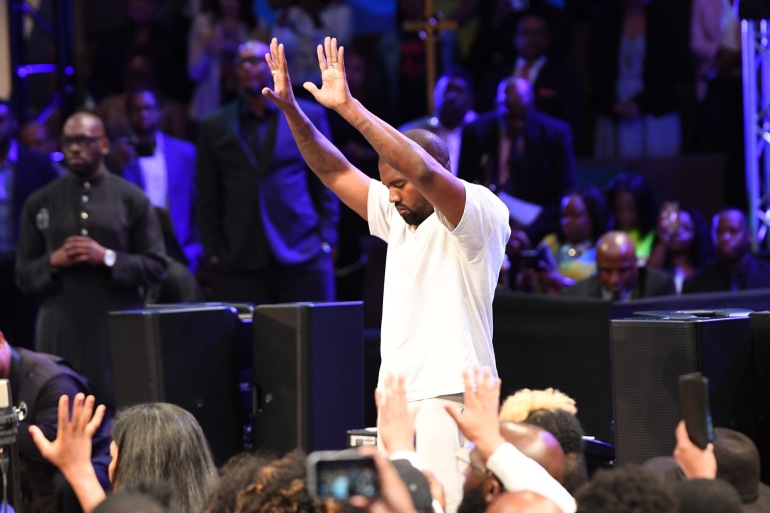 I do not have a clue about Kanye West’s heart!

It is not my job to question a man who claims Jesus Is King and says,

“My only mission and calling is to spread the gospel!”

Should I measure his words and actions against scripture? Yes, like any other person who professes faith. Truth and sincerity play out in time. I pray with all my heart that his decision is real and will impact and influence our culture for Christ’s sake.

Don’t doubt for a moment, that God moves outside of church walls or traditional methods! Remember, He is the Author of creating, innovating, breaking down and resurrecting!!

We have no clue what God may do, but my heart leaps at God still drawing His sons and daughters to His Love and Grace. In fact, it makes me want to get up and twirl, maybe, do a little holy dancing in my living room. Some singing and shouting, too!

I want to CELEBRATE what God has done. A new brother has joined the family! I applaud his decision! I could not be more different from him, if I tried, but our shared love for God and Jesus makes us family!!

WELCOME TO THE FAMILY KANYE!

“YE” is in THE House and under THE Blood❤️

CAUTION to Kanye: This family is a wild and unruly bunch. With all the flaws and failures of humanity. We’re not what we should be! It doesn’t diminish our Father’s love. Focus on Him!

8 thoughts on “Kanye … Welcome to the Fam”

“ I always thank my God as I remember you in my prayers,”

Hello, friend! Come on in.